Misleading claims about Chaga being brought to consumers

We are sad to see misleading claims about ingredient products being presented to consumers. These statements are disseminating through the value chain towards the consumers. It is disappointing that companies still get away with misinformation. Many are unable to distinguish between propaganda and facts.

We will use the example of MoG Chaga (Mycelium on Grain) which is Chaga being grown on grain in cultivator rooms and sold un-extracted (which means indigestible with limited bio availability), being presented as a serious and better alternative to natural, wild harvested Chaga mushroom extracts (which are digestible and soluble). 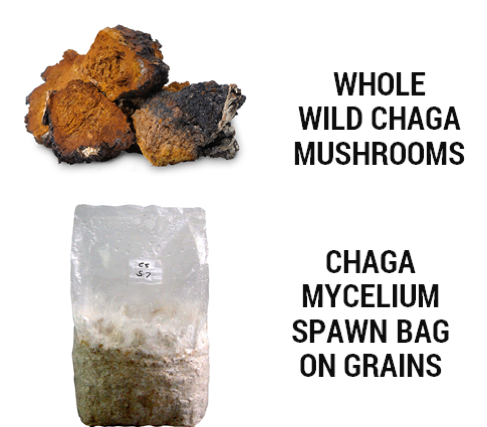 Chaga is a mushroom that grows naturally on birch threes and is known to contain polysaccharides, polyphenols and other bio active compounds. Large part of the polysaccharides are beta-glucans which are own to have immunomodulating bio-activities. It is shown though research that only wild growing Chaga contains the necessary bioactive  compounds which provides for the health effect.

In the last few years, some suppliers have taken to produce Chaga mycelium on grains indoor and are presenting this as chaga product with similar health effects as the natural chaga. MoG chaga extract contains only a fraction of the active compounds and bio activity compared to the whole chaga extracts. In stead of the bioactive polysaccharides the MoG Chaga contains lot of starch.

Wild-crafted chaga has a hard outer sclerotium shell, which contains a high concentration polyphenolic fraction which has extremely high antioxidative properties. Sclerotium is completely missing from all MOG chaga. The wild chaga extract is made from both the sclerotium and mycelium of the mushroom.

The MoG Chaga contains to a large extent starch, and much less beta-glucans and other useful polysaccharides as wild grown chaga. In the graph below from a recent analytical study, it is shown how the whole mushroom extract beta-glucan levels are significantly higher than MOG extract levels.

It can be shown that the artificially grown MOG Chaga is a bleak copy of the wild growing chaga, in terms of bioactive compounds. This can be easily revealed if ingredients buyers will ask the ingredients suppliers to state the maximum contents of starch in the product specification.

Some suppliers also try to create a perception that the wild growing Chaga is collecting pollutants, while growing in the free,  when that is not the case at all.  In over hundreds of production batches in Eevia Health, we have shown that the presence of pollutants, heavy metals, pesticides and so forth, are extremely low, in fact under detection levels.

The extreme purity is also supported by the choice to source the raw material from forests in the Finnish Lapland, north of the arctic circle in Finland. The northern conditions give great advantages to the wild plants that grow there naturally. The nature of Finnish Lapland is extremely clean and pure. The area is very sparsely inhabited. The population density is only 2 people per km². This leaves most of the space for the abundant, wild nature.  The purity of Finnish Lapland can be seen, for example from the lead content of the soil. Lead in soil is less than 15 mg per kilogram, while the corresponding number in Central Europe is typically up to 40 mg per kilogram.  The air quality in Lapland, with winds coming in from the arctic Barents Sea, is also Europe’s best.

Further research also show that the wild growing chaga outperforms any other mushroom when it comes to reputed bioactivity effects such as immunomodulation effects such as IC50 response.

The science also shows that the efficacy of wild Chaga extract in suppression of inflammation is clearly on a level of it’s own.  A recent study, compared many mushrooms in regard to inflammation and the results are shown below:

If you wish to have further information and a free test or formulation sample, please contact Eevia Health info@eeviahealth.com (www.eeviahealth.com)